In other words, solo skills add mojo to your Lindy Hop!

At Solo Mojo, you’ll be exposed to many different styles of authentic jazz in the solo form, from Charleston and Big Apple jazz steps to Solo Blues and much much more! Gain an in-depth understanding of these genres, learn new moves and work on beautifying your lines and strengthening technique and musicality.

Solo Mojo is a no-frills bootcamp focusing on vernacular Solo Jazz dance for Swing dancers! Classes start early in the morning – and on time! We want to encourage everyone participating to take as many classes as possible. 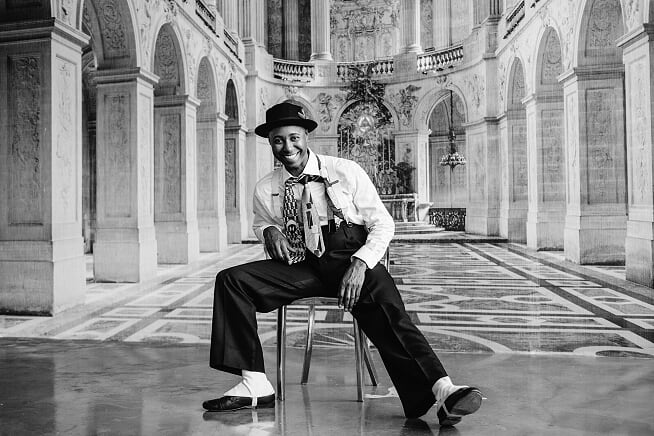 An original Lindy Hop revivalists from the 1980's. Mentored and trained by legendary Savoy Lindy Hoppers, most notably Pepsi Bethel and Mama Lu Parks. Also considered by one of the greatest Lindy Hoppers of his generation, Frankie Manning to be his third son - An honour he works constantly to live up to.

Ryan Francois remains an influential figure in the modern Lindy Hop world. He has been teaching, competing, performing and choreographing for over 35 years creating 3 successful dance companies. He is also a former US Open and American Swing Dance Champion. He’s taught, everywhere and directly or indirectly almost everybody. As a performing artist and choreographer his credits include the Hollywood movies "Swing Kids", "Malcolm X" and "Idlewild" the hit Broadway show "Swing!" and the widely popular TV shows Strictly Come Dancing, So You Think You Can Dance and Britain's Got Talent. As well as many music videos, most recently the iconic “2 Cousins” With Remy Kouame.

A jazz pioneer with a near Yoda like knowledge of the Vernacular dances.Ryan has a passion for sharing this knowledge of the Swing Era to dancers and non dancers alike, all over the world. Looking back on a stunning career Ryan can proudly say, that he is considered to be one of the best vernacular jazz, dancers, teachers and choreographers of the modern Jazz era.

Sing has been involved in the swing dance community for over 30 years. She learnt Lindy Hop in London, under the tutelage of Ryan Francois and Frankie Manning and developed a deep respect for the roots and heritage of the dance. Since then she has won several top competitions including the US Open Championships in California and the American Lindy Hop Championships in New York.

In 1996, Sing started the Asian Lindy scene in Singapore, teaching and creating events to bring bands and teachers to share their join Asia.

Apart from teaching regularly at Timbre Music Academy, Sing is also invited to teach, perform and judge at numerous festivals and events around the world, including Herrang Dance Camp in Sweden, ‘Swingtime Ball’ Beijing and New Orleans’ Ultimate Lindy Hop Showdown. Her experience of teaching and choreography is highly sough after from a wide range of performers from Singapore’s School of the Arts to the Singapore Night Festival.

Sing is invested in sharing the joyful dance of Lindy Hop with as many people as possible! 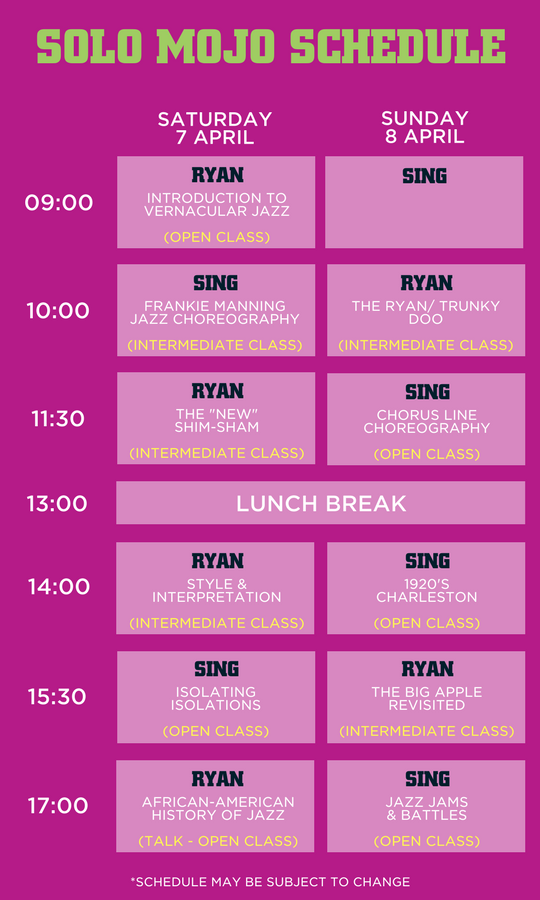 SOLO MOJO BROUGHT TO YOU BY DIRECTORS

Ana Ow first began swing dancing in 1998 and has not looked back upon her love for it, participating regularly in dance events all over the world. A creative spirit, lover of vintage fashion and full-time writer, she has taught and performed with Sing Lim’s Swing Express under Jitterbugs Singapore from 1999 to 2013, mostly for corporate events, showcases and performances. Nowadays, Ana prefers to soak in the social atmosphere of swing scenes regionally and be more involved in creating unique vintage events and experiences related to Lindy Hop and Authentic Jazz.

Pauline Leong has been doing the Lindy Hop for 6 years now. Her passion for swing dancing extends to vernacular jazz dance and Tap, which she has just picked up a year ago. As a student, Pauline joined the school band and learnt how to play the trumpet when she was in primary school. Fond memories of band experiences extend all the way to university days where she joined the NUS Jazz Band and was exposed to jazz music. Since then, Pauline has traded her trumpet for dance shoes, immersing in jazz music the best way she knows how to now – through dance

To register, please complete the form below